The AORUS series always stands for best quality and performance in everything concerning you. Gigabyte is striving for this in its Xtreme series and usually innovates in different aspects in each generation, which is undoubtedly appreciated by its fans community. Today they have officially launched their new series AORUS RTX 2080 Ti Xtreme.

Gigabyte introduces its high-end graphics cards of the AORUS GeForce RTX 20 series. This family consists of four models based on the GeForce RTX 2080 and RTX 2080 Ti. In all cases, we have personalized cards with a very sporty look. Gigabyte announces that it has revised the circuit board, the aesthetics and the cooling system. 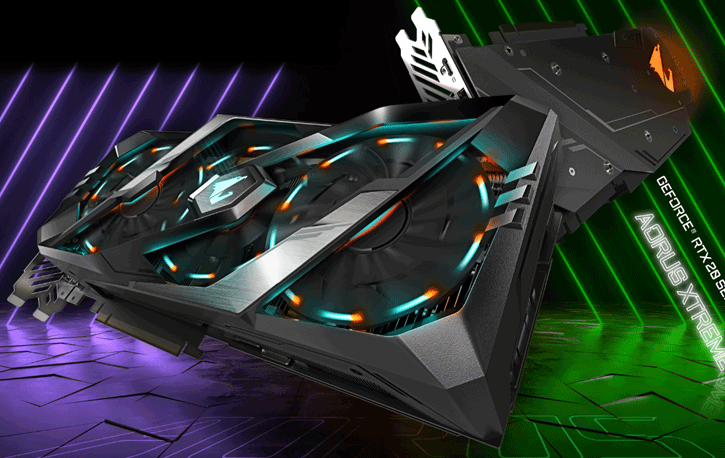 According to Gigabyte, these four graphics cards are equipped with the best GPUs for overclocking. They were chosen for their native and manual execution capabilities. In addition, a new custom printed circuit board with certified “Ultra Durable” components and with a coating against moisture, dust and corrosion.

The Aorus RTX 2080 Xtreme uses a 12 + 2-phase power supply circuit compared to 16 + 3 phases for the Aorus RTX 2080 Ti. The optics are based on a brushed and black metal housing. It has three 100mm fans with a new RGB ring light effect.

The three fans are designed to push air through a large heat sink that is in direct contact with hot areas of the board such as MOSFETs, RAM and GPUs. There is also a metal back panel that uses RGB fusion technology to illuminate the Aorus Falcon logo.

The cards are equipped with HDMI 2.0b, DisplayPort 1.4a and USB type C video outputs. The AORUS GeForce RTX 2080 Xtreme and RTX 2080 Ti Xtreme are expected shortly. Gigabyte also confirmed the upcoming release of the Aorus RTX 20 series, which is equipped with AIO water cooling.

Related:   Intel will launch a 28-core processor later this year and unveils a 5GHz Core i7-8086K